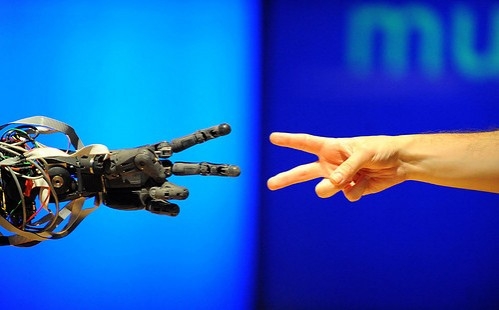 For those of you who think robots always act according to a programmed plan and therefore aren’t flexible: read on.

Robots, already working alongside humans in factories or hazardous locations, are constantly adapting their behavior to their environment. Human colleagues actively train them, literally saying: ‘good robot’ or ‘bad robot’.

But this type of team work is so outdated, researchers now say. Just as is the case with humans, there are more effective ways to make robots fit well into a human working team. If you make them switch roles with their colleagues, for example.

To test this, researchers of the Massachusetts Institute of Technology made robots and men work together in a virtual task of placing and drilling screws. A human person placed the screw, then the robot drilled it.

Not every person did this the same way. Some preferred a single screw to be placed and drilled before carrying on, others placed three screws in one time and then stood back to let the robot do the drilling.

The subjects were randomly assigned to train with the robots in two different ways. One group communicated with the robot in the original way of saying ‘bad robot’ or ‘good robot’. The second group switched roles to experience what the work was like for their working partner.

After the training the researchers saw some significant differences between the two groups. The subjects that had switched roles were more satisfied with the robot performance. And the robot was less uncertain about the actions of their human colleague (this uncertainty was calculated by the researchers).

Because the experiment took place in a virtual environment, we still need to wait for results of humans actually working alongside a real robot. It’s an important subject to investigate since more and more robots enter society, working in hospitals, on farms and even in households.

“People aren’t robots, they don’t do things the same way every single time,” Researcher Julie Shah says. “And so there is a mismatch between the way we program robots to perform tasks in exactly the same way each time and what we need them to do if they are going to work in concert with people.”

Her colleague researcher, Stefanos Nikolaidis, adds that humans, on the other hand, also need to change their ways when working with robots. Robots need to be trusted, which now still is a problem.

“If a person has learned to do something for 20 years, it’s hard to change and to place trust in a machine. It’s one of the biggest barriers we are facing.”