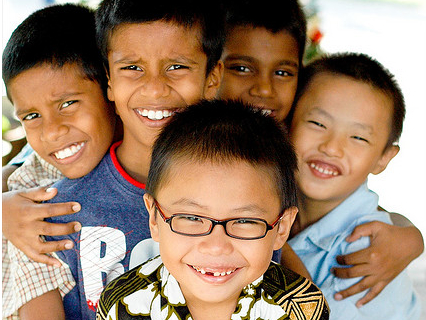 It’s tempting and easy to think we are now much more civilized, intelligent and worldly human beings than those hunters and gatherers from the past. But, in fact, our brains barely evolved since then. Societies may have changed dramatically, we are still bound to move about in groups of just a 150 friends.

Hunters and gatherers lived in groups of roughly 150 people. When the clan grew bigger, they split up. That number is still alive today, limiting sizes of companies and social networks. There are probably just about 150 people you would have drink with when you would bump into them on the street.

This 150 is called the Dunbar number, after anthropologist Robin Dunbar. He plotted group size of various monkeys against the size of their neocortex. and found a connection. Then he calculated the groupsize of humans at roughly 150. The same number popped up in studies of all kinds of historical human groups.

The number 150 was followed by more quantitive social limits. According to Dunbar we just have three to five very best friends and we will be devestated by the death of just 12 to 15 loved ones. Another important number is 50, the typical size of sleeping camps of hunters and gatherers.

Dunbar’s theory connecting brain size to group size has been very influential and keeps gaining importance now that social networks start to dominate society. The more personal social network Path, for example, is also works with a limit of 150 people. If this number would grow, initiator Dave Morin argues in an article on Businessweek, you would start to filter what you share.