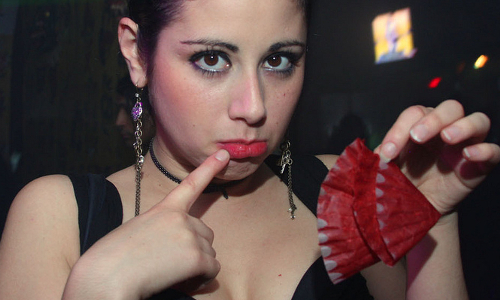 It’s not only that people gain weight because they are bad at resisting the temptation of a snack. Gaining weight in turn also increases the inability to control eating impulses. Media like Yahoo and LiveScience enthusiastically brought this surprising news a few weeks ago, pointing to a study published in Psychological Science on april 29th.

Was this an exaggeration of a vague association that was found?

It didn’t seem like it. The offical press release didn’t differ much in suggesting a causal relationship between the two. One of the researchers, Angelina Sutin, was for instance cited as follows: “Weight can be such an emotional issue — we thought that weight gain may lead to long-term changes in psychological functioning.”

But can you test that? The researchers used two longitudinal studies, to look at the data of 1,919 subjects, measured at two points in their lives, with an interval of 10 years. Their analysis showed that middle-aged adults who gained 10% or more also “increased in their tendency to give in to temptation, yet were more thoughtful about the consequences of their actions.”

This of course doesn’t say anything about what influenced what. Gaining weight could be a consequence of a changing personality. What further undermines firm conclusions about weight causing personality changes is the fact that the studies measured personality traits by asking the subjects to rate themselves. It could very well be that people that gained weight felt obliged to conclude that they are bad at resisting temptations.

So there is no reason yet to use your increased body weight as an excuse for eating. What may be more interesting is the simultaneous development of two, on first sight contradicting, personality traits: impulsiveness and deliberateness.

That is why the researchers stress the importance of the emotional component of interventions. As they write: “even people who become more thoughtful about the consequences of their actions may have limited success at inhibiting their behavior.” Hence the study’s title: ‘I know not to, but I can’t help it: Weight Gain and Changes in Impulsivity-Related Personality Traits’.