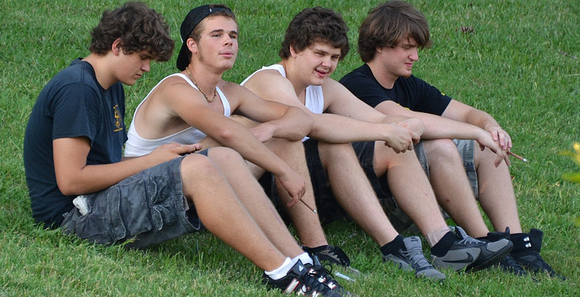 Picture a group of almost identically dressed girls sitting and giggling together. Then think of a couple of boys walking around kicking garbage cans. In which one of these two groups would individuals have the most trouble sticking to their own values?

Two Croatian researchers were curious and set up an experiment to measure susceptibility to peer pressure of 475 high school students. First they asked them to fill in various questionnaires about peer pressure and attachment to friends.

Just like they already expected from former research, they found that boys are more susceptible to peer pressure in risky behavior.

The boys also reported more avoidance of negative emotions and conflict in their relationships with friends. Girls, on the other hand, reported more anxiety of loss of friendships.

Then the researchers tested susceptibliy by means of an experiment. They took a random sample of 80 boys and 80 girls from 15 to 17 years out of the former participants and asked them again to answer hypothetical questions. This time, however, the students were placed in a fake chatroom. They were convinced they first saw the answer of other participants before answering themselves and thought that the others could see their answer as well: real peer pressure.

In this experiment susceptibility to peer pressure resulted to be higher. The researchers explain this difference by looking at room for reflection. When filling out a questionnaire the students had time to reflect on their own behavior, while in the experiments they were more concerned with their actual behavior and the pressure of other’s perception.

Again, boys were less able to resist peer pressure to engage in risky or delinquent behavior. This might very well have to do with the difference in social acceptance of this behavior for girls and boys, according to the researchers. In most societies, including Croatia, they describe, these types of behaviors are commonly seen as a normal phase of boy’s development, strengthening their masculine role. This may increase the boys chances of engaging in this type of behavior when their friends urge them to do so.

The experiment also showed that boys who are more avoidant show lower susceptibility to peer pressure. We are probably speaking about those who “are cool and maintain an emotional distance from others”, and who “do not care what others think of them”, as the researchers describe.

Girl’s susceptibility was positively associated with anxiety. This in turn was also easily explained by the researchers: these could be “girls who desperately seek the company and attention of others and tend to be highly dependent on others for self-esteem”.