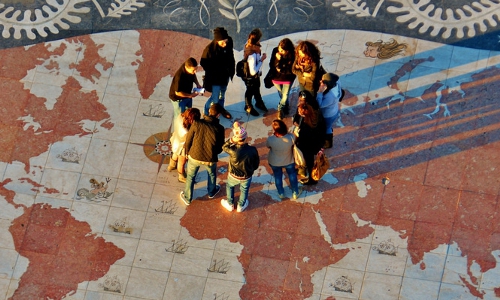 Why do humans often make independent but similar discoveries at about the same time? What makes us repetitively stumble upon that new word or phenomenon that we just learned about the other day? And how do mice know all about our poison and traps?

Is it because all members of a species share a thelepathic-like collective memory? It is an idea suggested by just a few scientists without much actual data to build upon, yet it recieved a lot of attention.

Every once in a while someone else opens the (online) discussion again: “I once heard about this amazing experiment in which…”, pointing for example to a study in which subjects were given either a one day old or a brandnew newspaper crossword puzzle that they didn’t ever see before. The puzzles that had been in the newspaper, and that thus thousands of people had already been working on, were solved much quicker.

Someone else hears the story and remembers something else: “Once there were these monkeys on a an island”, and starts telling the story about the ‘miracle of Koshima’. When people added sweet potatoes to the diet of these monkeys, the younger monkeys developed a trick: washing the potatoes in a river. The trick was then taught to some of the older monkeys as well.

The spreading of this washing-habit was all a rather slow process, untill the hundredth monkey learned the trick. That same night every member of the tribe was washing potatoes in a river. Even monkeys of a tribe far, far away from the island, started doing it.

What? Is this all true?
If you start looking for actual scientific research reports the wild stories crumble away quickly. The experiment with the crossword puzzles seems not to ever really have taken place , but was only talked about in a movie called Waking Live(2001).

The monkeys on the island did exist and their washing of the newly introduced sweet potatoe was even documented scientifically, but the claims about the hundredth monkey and the immediate following massive spread of the trick was only described by someone that conducted his work a little less scientificically. Philophy of science teacher Ron Amundson humorously explains his unmasking of the story in the Skeptical Inquirer in 1985.

Another story, that actually seems to have occurred, is about birds, blue tits, in the twenties. Once they learned to open the taps of milk bottles to feed themselves on the upper layer of cream, the trick spread rapidly throughout the UK and even Europe. Since these birds never travel far, an attractive conclusion was soon found: collective memory.

Scientists, however, found other models to explain the rapid spread of this behavior. Imitation, or even just inspiration to focus on the tap of the bottles, could also have done the trick.

Triggered by these stories some more alternative researchers have delved themselves deeper and deeper into the subject of telepathy. One of them is Rubert Sheldrake. He is fascinated, for example, by the familiar feeling of ’being stared at’. He also put some experiments on his website to test telepathy via internet or the phone. How these actually relate to science is very much up to debate.

The last word clearly isn’t said about this telepathic-like concept of collective memory. It just seems we have to wait a little longer for other scientists to start experimenting with crossword puzzles.