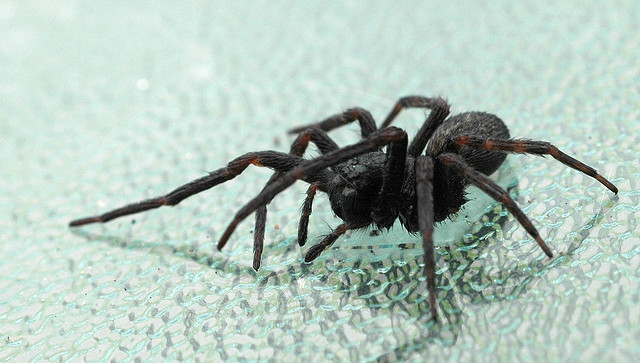 Spiders not always act according to their own will. When they are infected by a certain kind of wasp they become real life zombies. A spider then suddenly doesn’t build his web for himself. He uses a radically different design, so that the wasp larva inside him can comfortably use it. When the spider dies, the larva crawls out and settles in his new home.

It sounds like sciencefiction but it’s actually old knowledge to scientists. For years they have been studying the way parasites influence the behavior of their hosts. The new issue of the Journal of Experimental Biology is dedicated to this creepy subject, because scientists finally found out what happens inside the infected insect’s brain.

The parasites appear to produce proteins that influence the spider’s behaviour or alter neurotransmitters in their brain. That’s at least what happens in the shrimplike creatures called gammarids. They live in ponds and usually dive into the mud when they are scared.

Do we ever get in contact with these kind of zombie parasites? Oh yes. We actually spray one of these viruses deliberately on our own food, like cabbage. It infects caterpillars that then get the order to climb high up in a tree, die there and sprinkle even more of this lovely virus down. Don’t worry, this parasite doesn’t affect us.

But another one does. It’s called Toxoplasma and it reproduces in the guts of cats. Rats that are infected get more curious, less fearfull and less alarmed by cat odour, making them an easy prey for cats that then produce even more Toxoplasma in their guts.

Via litter or meat humans can get contaminated too. Some studies have shown that such a Toxoplasma infection can cause slightly different behavior and a higher risk of schizophrenia.