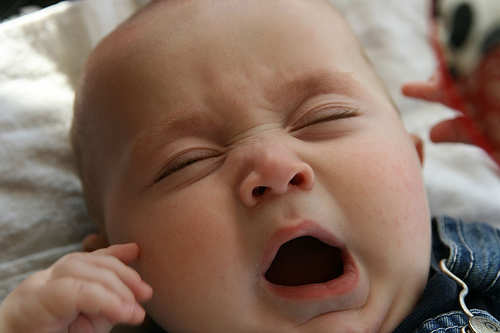 We’ve all had our rough moments trying no to yawn in front of company. Yawning, after all, means you’re bored, right? Not necessarily. Yawning can also be a sign of sexual arousal. Here are 10 explanations scientists have come up with.

This is probably your first guess, and you’re quite right. People yawn when they get bored. Students watching a boring video yawn significantly more than the ones watching something amusing.

According to Dr. George A. Bubenik of the University of Guelph in Ontario, the more of the opiate neurotransmitter endorphine in your brain, the less yawns. But there are far more reasons to yawn.

Because you’re sexually aroused
It’s probably hard for your lover to believe, but yawning during sex is not a bad thing. It can actually be a sign of arousal, scientists say, caused by dopamine in the brain. When scientists experimented with drugs stimulating erections, yawning and stretching were common side effects.

Neuroscientist Robert Provine: “Yawning is often associated with a change of state: from wakefullness to sleep or from not aroused to aroused.”

To show your teeth
Paratroopers jumping out of an airplanes to join the battle, often yawn when they’re getting ready. Dogs are known to yawn before they attack. These are certainly no signs of boredom. Some believe our ancestors yawned to show their teeth and intimidate the enemy.

Because you’re an animal
Yawning is not something typically human. You probably have seen cats and dogs yawn. In fact almost every animal has been spotted yawning, even birds and fish.

Humans already start yawning as unborn babies, still in the womb. But there’s one type of yawn only humans, chimpanzees and dogs are thought to do: the contagious yawn.

To connect with others
Human yawning can also be explained with social factors, it could be a form of expressing empathy. Molly Helt found that children start imitating yawns of others at the age of 4.

Heavily autistic children even never seem to be affected by contagious yawning. Other research showed we are more likely to yawn along with family and friends than with strangers.

Because you’re reading this article
We hope we’re not boring you too much, but there is a good chance you yawned once or twice while reading this article. Just reading about yawning can trigger a yawn, especially when it’s illustrated with a picture of someone yawning.

But this theory has been disproven by neuroscientist Robert Provine. Giving extra oxygen to subject didn’t make them yawn less, neither did lowering carbon dioxide levels.

To cool your head
This is nowadays an accepted scientific answer to the question why we yawn. Cooler heads work more effectively and by taking in air through our mouth, we try to reach the right temperature.

This theory is supported by the finding that we yawn more during winter than in summer. When it’s hot, the warm air surrounding us won’t do the trick.

Because you have a serious medical condition
Yawning can be the first symptom of a so called vasovagal reaction. This is a common cause of fainting, often accompanied by nausea, light headedness and cold sweat. A heart attack can also cause excessive yawning.

People with sleeping disorders, like narcolepsy or hypersomnia, sometimes have yawning problems. So if you really think you yawn too much, it might be a good idea to visit a doctor.

Especially aged persons do not yawn in the hours after they’ve woken up. Young adults start yawning earlier in the day, they can already start after being awake for just one hour.