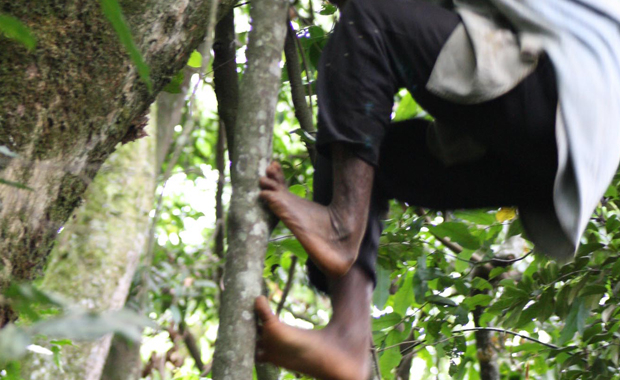 If you’re fond of tree climbing, here’s some good news: if you stretch up your calf muscle, you can radically improve your skills. That’s how Ugandan Twa people learn to ascend trees almost as good as chimpanzees, researchers found.

The Twa people climb trees all their lives, looking for honey and fruit. Researchers studying the tribe were astonished by this skill. When they tried to climb the same trees, they found it extremely difficult. So they started to investigate what exactly enables the Twa to do it.

The researchers saw that the Twa could bend their ankles a lot further then other people, such as Ugandan farmers living nearby. The Twa foot can reach an angle of up to 40 degrees to the shin, while average people don’t get beyond a mere 15 or 20 percent. This makes it possible to hold the body a lot closer to the tree, which reduces the energy it takes to climb.

The researchers think the Twa are not born with these long muscles. Just like people can shorten the calf muscle by walking a lot on high heels, Twa probably stretch theirs by doing the opposite.

These findings change our picture of the lifstyle of early human beings. It was always thought that our ancestors, having the same ankles as we do, were bound to the ground. Now we know that this bone structure doesn’t keep us from climbing up high.

We can not know for sure, because muscle tissue doesn’t fossilize, but perhaps Lucy and her clan also had stretched calf muscles. The researchers for example think it’s very plausible that these early humans lived in nests in the trees.

But the only practical conclusion we can draw now is that it’s probably better to wear flat shoes if you like climbing.