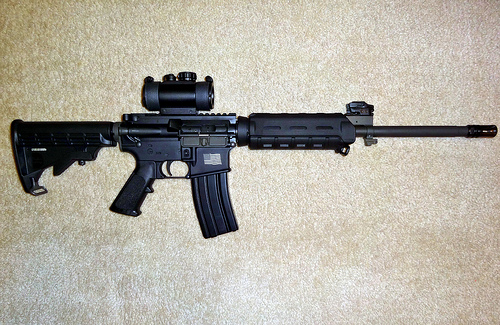 You’re usually not allowed to make a gun like this, an AR-15, without filling some federal paperwork. But you can skip this if you print certain parts at home. It’s already possible with 3D-printers. Are these popular printing machines making access to guns even easier?

The New York Times published an article yesterday about three Americans that seperately produced an AR-15 using a 3D-printer. They printed the lower receiver, which requires the paperwork and shows the serial number, at home and in plastic. Then they attached the other standard metal components to it. This is all legal. And it works, they say.

It’s worrying representative Steve Israel, Democrat of New York. He thinks ‘it’s just a matter of time before a 3-D printer will produce a weapon capable of firing bullets.’ These plastic guns are not detectable by security scanners. He therefore wants to extend a law, expiring this year, that makes indetectable guns illegal.

There are still other humps in the road for plastic guns, though. Plastic, for one, is not resistant to the shock and heat of firing bullets. Even in the three discussed AR-15s, which still have a metal chamber and barrel, the plastic part eventually failed, after hundreds of rounds.

Another disadvantage of 3D-printers would be the crudeness of the device. One of the three Americans producing an AR-15 says the plastic results may look good, but won’t really work for close-fitting parts.

But regardless of how long before everyone can print a working gun at home, it still is a good idea of Mr. Isreal to start rethinking laws considering new technologies. The 3D-printer, for example, is growing in popularity almost like computers in 1980, and you can imagine all kinds of things coming out.