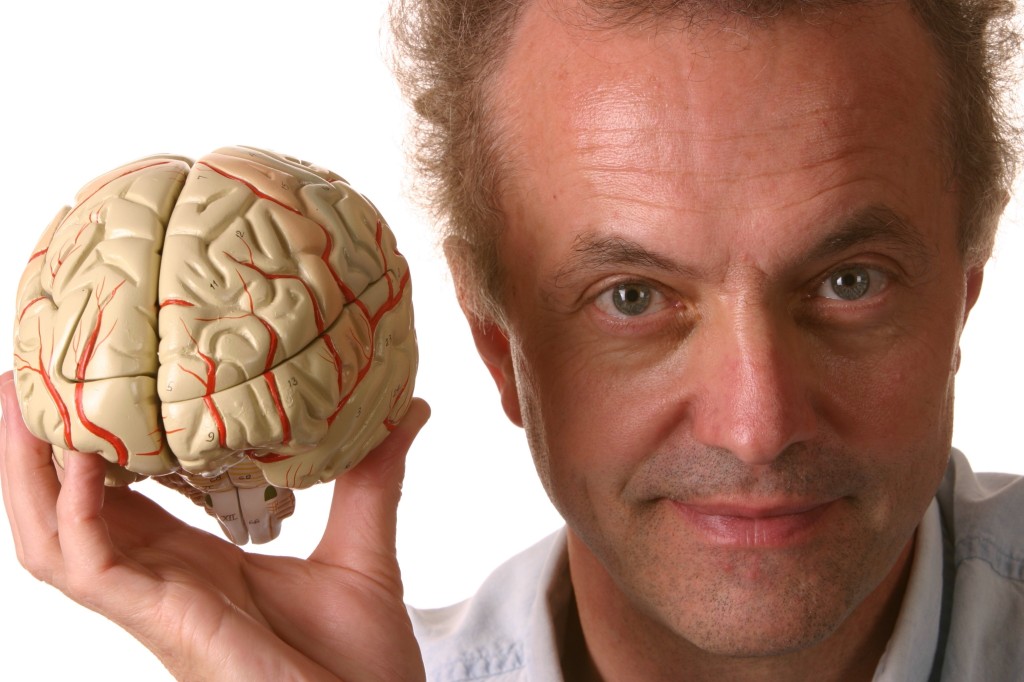 Our brain may be the key culprit in causing crime, argues neurologist Adrian Raine in his new book The Anatomy of Violence. He talks about the connection between eating fish and killing people, about whether or not we should believe in free will, and about his personal experience with extreme violence.

Isn’t it just logical that a criminal act starts in the brain?
“It should be logical, and yet it’s a perspective that’s really been ignored for the past 70 years. To explain crime people have been focusing on the environment, like poor housing, unemployment, discrimination, bad parenting and so on. That’s a lot of good work. But, like you’re saying, all behavior comes from the brain. So when the brain has been damaged, this could also raise the chance for an individual to commit a criminal act. This explanation hasn’t been popular, partly because what you can’t see is what’s happening inside the brain.

“That’s different with environmental problems: ‘Oooh, there’s lots of crime over here, it must be the bad housing’. But now new techniques are opening a window into the criminal mind. We have seen differences in specific parts of the brains of murderers, for example. That’s the new field of neurocriminology, that is what my book is about.”

What is different in the brain of murderers?

“Scientists have documented that a part of the brain among murderers, anti-social and psychopathic individuals, is not functioning well compared to normal brains. We’re talking about a diminished amount of grey matter, or neurons, in the prefrontal cortex, the part right above the eyes and behind the forehead.

“The prefrontal cortex is involved in checking and controlling our impulses, like the impulse to steal something. It’s the guardian angel of behavior that also regulates emotions, preventing a very angry person from striking someone, for example. If that angel is asleep, the devil can come out and criminal acts can take place.”

What does that say about the nature-nurture debate?

“The explanation of crime is 50 percent genetic, 50 percent environmental. I say that because the environment itself can influence the brain. If a mother shakes a crying child, its brain rocks back and forth in the skull, bruising the prefrontal cortex. Here we have a social cause producing biological brain changes.

“Another example is a study we did on over 4.000 babies. We looked at birth complications, such as a lack of oxygen that damaged the fetus’s brain. And we checked for maternal rejection of the child at 12 months old, the mother having attempted abortion for example, or the infant being separated from the mother. Then, 18 years later, we looked at which of these babies had become violent offenders.

“It turned out that birth complications alone didn’t do anything. Maternal rejection alone also didn’t do much. But when these two were combined, it tripled the chances of the baby becoming a violent criminal offender. This is called a biosocial interaction. It’s a bit like when you take two chemicals; when they are separated nothing happens, but if you put them together you get an explosion – in this case we get an explosive increase in violence.”

These connections would be unethical to conduct experiments with in order to prove. How can you determine what causes what?

“Yes, you’re quite right. We’re only talking about associations. We can’t establish causality from brain imaging. But that’s the same for the classic studies of unemployment and bad housing, we don’t manipulate those things. We also don’t put some children into abusive homes. But there’s a growing body of evidence pointing in this causal direction.

“One neurologist has documented that people with head injuries to the under side of the prefrontal cortex, the orbitofrontal cortex, become psychopathic-like. They lack feelings of remorse, are antisocial, and make bad judgements. Before the injuries these people were quite normal. That suggests causality.

“Another study in an English prison randomly assigned half the prisoners to be given omega 3 and the other half to receiving a placebo. The omega 3 reduced bad behavior in the prison by 35 percent. This study has been replicated in the Netherlands, showing roughly the same results.”

If crime has to do with nutrition, wouldn’t we see big differences between countries as well?

“Yes, we do. Take Africa. Here we find countries with the highest homicides rates in the world and with poor nutrition. One study looked at 26 countries throughout the world. They plotted the yearly amount of fish the inhabitants ate against homicide rates and found a strong correlation, of .63. That means 40 percent of crime can be accounted for by eating less fish.

“In Japan they eat their whole body weight of fish every year, and they have the lowest homicide rate in the world. In Eastern Europe, they eat about two pounds a year, and these countries have very high homicide rates. America is the same. Of course it sounds a bit ‘fishy’, but we know fish is rich in omega 3 and this is critical for brain structure and function.”

Could this help in preventing crime?

“We could indeed try to increase fish consumption or omega 3. That’s like a natural medicine, isn’t it? It may not help everyone, but could help a subgroup. We’re only beginning to open our eyes to this biological basis of crime. But there’s more.

“In one study we enriched the environment of three-year-old children. We gave them more physical exercise, cognitive stimulation and better nutrition, including more fish. Cognitive stimulation being drama lessons and memory exercises, something to stimulate their brains. We randomly assigned the children to either this group or a control group. Then we measured brain activity with electrodes on their skull.

“Other studies investigated the effect of meditation and mindfulness. Learning to be more aware of one’s internal feelings and emotions and focus attention in a more calm and relaxed manner appeared to enhance activity in the prefrontal cortex. People who meditate also show an increased thickness in this part of the brain.

“These sorts of interventions can consequently enhance brain structure and function. They have tried to show that meditation positively affects prisoners too by reducing aggression, but these were not methodologically great studies and we need randomized, controlled trials.”

Isn’t ita problem that there are so many ways to address crime in terms of biology?

“Yes, it’s going to be complicated. There’s no magic bullet that will shoot down the crime figures. No pill. The violent offender is just like a jigsaw puzzle, made up of lots of different pieces: lack of supervision, poverty, abuse, but also prefrontal functioning, mothers smoking during pregnancy, low resting heart rate, and high testosterone.

“We’re just beginning to discover the biological pieces in this new generation of studies. The next generation of research will aim to put these pieces together with the social pieces, so we can see the violent person in front of us. That’s the challenge lying ahead of us.”

Will we ever be able to stop violence?

“We won’t stop all of it, but can we reduce it by taking on board the new perspectives from neurocriminology. We can change the brain. “Biology is not destiny” is what I argue in my book.”

So, are criminals really to blame?

“Once upon a time we would burn witches. Now we’ve seen these women were suffering from mental disorders or epilepsy instead of being possessed. We’re beginning to see there are reasons why people are wicked.

“If biological and social factors push innocent babies into a life of crime, are they to blame? They’re not responsible for their mother damaging their brains by shaking them or for being brought up in bad neighborhoods. I think we cannot ignore this fact of diminished responsibility, it needs to be more taken into account in court.

“But wait, you said yourself all behavior comes from the brain. So all acts have a cause. And just because we found that cause, does that mean they have an excuse? We wouldn’t want to live in a society where nobody can be blamed. It would lead to Armageddon. Offenders make a decision, just like alcoholics make the decision to drink beer. It’s just that it’s not an entirely free decision.

“So I’m still debating that with myself: what’s an appropriate perspective? I’m just a scientist, I can lay out the scientific evidence. But society must make its own decision on responsibility and punishment.”

Do you believe in free will?

“I believe I’m just a biological machine which has been built to believe in free will. This notion that we can act on our environment is important, otherwise we should never have been able to build our society. So I don’t think it’s a wrong thing. It’s like religion. If it can give faith in yourself: Great, let’s believe in free will.”

Do we all have the potential to kill?

“Yes, we can round all of us up and in four weeks train us into fighting machines that go to war. We have known this throughout history. We all have the potential to kill. It’s been documented in warfare. Good people with a conscious will be trained to pull the trigger and have no sense of remorse. Propaganda can change our minds and completely change our behavior. Again: it’s not just biology.”

Do you have more sympathy for criminals now than before your research?

“Yes I do. For four years, I I worked in a maximum security prison. Learning about the early factors that increased their chances of becoming criminals made me feel more sympathetic and empathic towards them. Even though they’ve done terrible things.

“At the same time, I’ve also been a victim, in 1989, while on vacation in Turkey, I was attacked by a burglar who attempted to cut my throat. He almost succeeded. After that I just cared about myself and not at all about the person who committed the crime. I thought his throat should be cut too, an eye for an eye. All of us probably recognize that feeling. This need for revenge can be explained from an evolutionary standpoint. If we hadn’t been hitting back when hit, we wouldn’t have survived as a species.”

Do you still hold a grudge against that person?

“He received a prison sentence, that made me very happy. But time is a great healer. Assuming he had these early risk factors that made him more likely to commit this act, well, then I would now feel some compassion for him.

“But maybe there’s also such a thing as just being evil. That you actually choose to commit a criminal act, even when you have no risk factors. Maybe. If you believe in free will, you have to believe that’s possible. So what do we do with these people then? They’ve got no excuse. Should they be punished more severely than those with early risk factors for crime which were beyond their control? I’m still not sure.”